how about the current war

if you have time to reflect upon the real war that is going on everyday in between the humans doings you my like to see what the "bak - basis voor actuele kunst" is trying to collect and expose some information through artists like renzo martens.
more at www.bak-utrecht.nl
Posted by dontneed at 9/29/2006 No comments:

I work for Starbucks as a shift supervisor, and another barista I work with told me about this site...i am SOOO glad that she did. This is the perfect place for me to vent!!! I despise my manager, he is the biggest jerk you will ever meet. Firstly, he shows SOO much favourtism it's unbelieveable. My friend (who works with me) gave her sister her partner discount on a drink, and my manager found out and he wrote her up!! (apparatnly you can only do it when you are on break). Then this psycho other shift supervisor (whom my manager LOVES) rang thru a girls drink as a partner beverage (free drink) when she wasn't even working!! I was the manager on duty at the time and I didn't want it to come back to bite me in the @$$, so I told my manager about it, AND SHE DIDN'T GET IN ANY TROUBLE!! So I called partner resources (third party that listens to you bitch about how much you hate your job and foreards it to human resources) to complain about my manager, and it's been 8 weeks and I haven't heard of anything being resolved. Let's just say I am in the process of finding another job. My manager is racist (he favours people of his nationality, and only hires people of his naitonality...i was hired by another manager). So much for that respect and dignity guideline....
Posted by dontneed at 9/26/2006 No comments:

and for those that did not had enough whatch the video at
hereitgoesagain
in fact, many artists ask me when i do show then this clip from _ok_go_ on_the_treadmills: are they an artists group or just musician? hereitgoesagain, you decide what is really ok_go. have fun.
Posted by dontneed at 9/25/2006 No comments:

vanessa is back to her roots 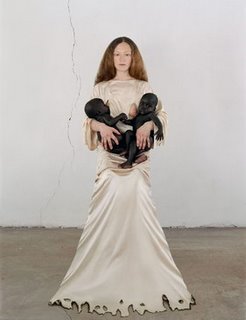 amazing that vanessa beecroft realized this new romantic, art historican, work. very close to home, it evokes, la bella italia, in a way that only catellan would approved of. tell me what you think about it.
Posted by dontneed at 9/25/2006 No comments: 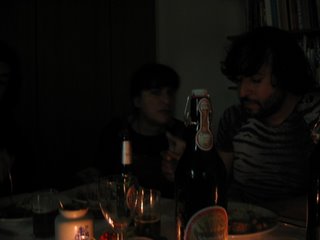 teresa margolles at the duesseldorf kunstverein
was very simple not much to see but a lot to question and feel with the mistress of brutal formalism. i think they spected dead bodies from teresa but they just got dead treads. bravissima. 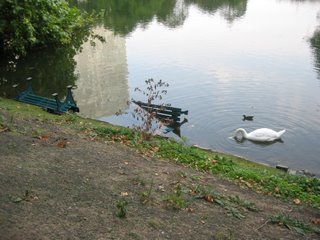 what a contrast we have in this town, i never saw so much homelesness in a such a rich place. dusseldorf wants to have a big art event a quadrienale. a big art evente very for years just to be in the safer side. very clever. but the atmosphere is not of a big celebration, really.
the city is booming but the disparity between social economical situation are very presente. no much solidarity aparently.
the photo above could be a installation by elmgreen and dragset but i am quite sure it is the work of some homeless people. this park very near to k21 and the opera was full of them. see photo below 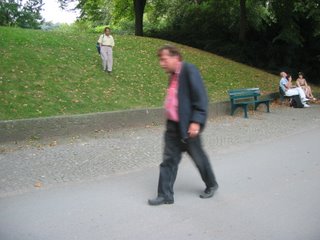 he show from francis baconwas quite impressive.
the bruce newman exhibition was quite ok, but you can see that it is a gallery show not a really great retrospective, as he really deserves fro his work. this show is related to the prize (€E250.000) that he was awarded by the city. in this case they are buying the prestige to have an artists getting their prize, nothing new in the art world but still a provincial attitude.
the worse part of this quadrienale is the pavilion by lupertz. is quite sureal to see next to the bilding where is bruce newman show. but the caravaggio exhibition i can not even talk about it, just for you to have an idea we could not see it till the end. enough is enough.

with friends from the kunstverein we went to a small exhibition space. i asked some artists what they think about of this spetacle that the city try to pull off. they said that the local artists are the ones that do enjoy it the less, because they can not be part of it at all.
Posted by dontneed at 9/25/2006 No comments: 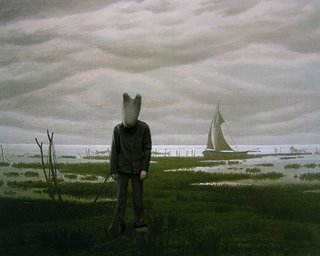 here you can see the new show from
julia oschatz
Posted by dontneed at 9/25/2006 No comments: 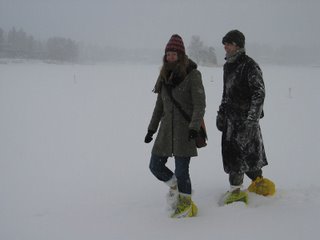 it sounds interesting what annette and mark are trying to chill up in the north. more here at
momentum2006
Posted by dontneed at 9/25/2006 No comments:

"lost at sea" with adrian williams 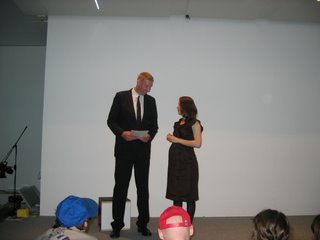 last week andrian williams showed her qualities as fact-fiction maker. she performed the poems of nathaniel von harbour,red by nathaniel himself.

here some from the poem "lost at sea"

"a story of deception" 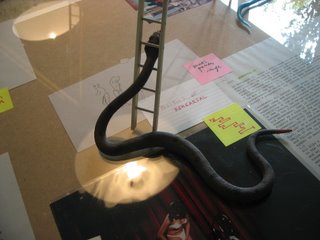 just talked with francis alÿs, he is doing just fine. after the opening in the portikus last friday we went with the whole portikus gang and some friends from zürik to the pizzaria salvatori, just around the corner. we watched the agassi's last match and did eat pizza. now you know where to get a good pizza if you ever come to portikus and end up getting hungry afterwards. 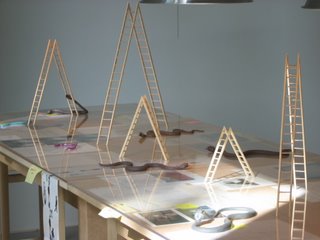 the film "a story of deception" which is showing at the portikus, is what you can expect from a magician or master of illusions like francis, i would say. it is almost like a single image which shows a road that loops making you wanting to see something in a mirage like enviroment, bu this road leads to no place. but that action of go back and forth, to loop and never get to any real place have to do with the latinoamerican social reality somehow, as the piece was made in patagonia in a periodo of three year. that is one of the takes on that situation. asia is playing a much important role in the global affairs today.
while talking with fracis i had the impression that he try not to be here, really ( or anywhere by that metter ). in a world that you have to be very present to be accepted by the entertaiment and bussiness part of the art, not an easy task. but here is managing it. (remember what hi did in venice). while he was whatching the agassis last tennis match at the pizzaria i asked him why took so long to artangel to do something with him. he answered that, they had to wait seven year, from his part to get the project seven walks for london. artangel is doing an interesting job and making the right choinces, even if it means to be patient for several years sometimes.

i actually was sort of surprise with the setting for the presentation of the film, in the portikus. it was projected in the wall of a room build inside of portikus. inside of the room there is a table where a snake and latters game is set. on the table are displayed papers telling about several project of francis. projects like the "politic of rehersal" a very complex project made of three segments. if you have the chance take a look on that one, please do so. in the ende this whole room encluding one painting that was sawed right in the middle vertically,( a hommage to fontana, because he born in patagonia) make the whole room installation a good opportunity to comprehend the complexity of the work of francis, an artist that is beable to work with so many medias and almost nothing.
moost of his works end up being just metaphor. 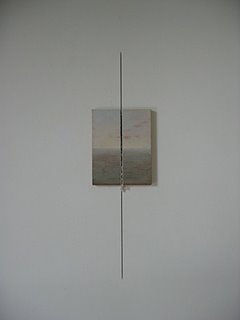 nikola dietrich, the main curator at the portikus, was telling me that she was inspared, to make this room and assemble the snake and latter game by her trip to buenos aires, where she had the chance to see the exhibition where francis show this work for the firs time at m_a_l_b_a museum de arte latibnoamericano de bueno aires, last april. the very aspect of playfulness in the work of francis came quite clear with the game situation. 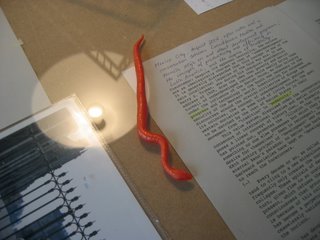 coming up next at zuviel.tv is jan speckenbach.
when came to art videos, those boys in berling are delivering it.
Posted by dontneed at 9/03/2006 No comments: