exhibition 149 at the portikus

this construction at the portikus in frankfurt, erected by michael beutler, gives us a hint of the whole range of possiblilities we find today to deal or not deal with the current art affairs after the mega european art summer of 2007, which end up becoming a funny story. but actually in this construction we will find more questions then answers to any current discussion on the manufacturing of art and its relevancy for todays life and doings. we will see in this mammute object constructed inside of the portikus referencies to sculpture, paintings and objects. from concrete art to art brut. after seeing it we can attempt to make reflections upon form and composition. we could ponddering about art made in the last few years by artists playing with excessive use of materials. we even can have thoughts on recycling of materials used in art and the recycling of art itself. i am sure works like this will rise question of the
how much art should be more political in its essence and contents or just be art for the sake of art.
do not forget that we are living in the age of _metropolis-like_ urbanity. artist are facing difficulties to filling up the mega art spaces provided by more and more museums or by the bienalles, everywhere, art fairs and huges building complexs from frankfurt to dubai.

michael have very clear said in some interviews that he learned and is inspired by people like buren and he studied with thomas bayrle and george harold. this late work can be seen as a very nice homage to these artists somehow. they sure deserve it.

looking at the a not so distant past i can not forget one of michael's first great series of works, which i saw at michael's studio at the staedel school. it was objects made out of hardning cement inside of jute bags. after tearing the jute off he end up having this brillante drawings revealed through the marks left in the cement. for a project, around 2001, that we did in london he build a machine that transformed alufolie into a hard looking material again turning things around and allowing the material respond to the needs of the work, leting the process do most of the work.

another great piece by michael was the _verputz machine_ ( plastering machine ) a room-specific work he created for the project dontmiss in frankfurt in the summer of 2001.

today he still approching in the same manner his art production but i am quite sure things are turning to more serious adventures here. the portikus contruction and the the contruction at the LAC in frankfurt are taking michael work and the viewers to new hights, literally.
Posted by dontneed at 9/23/2007 No comments:

the 2007 filminute festival is back


check this 1min.films. the festival is back and kicking. you will find some cool poetry in haiku style here.
Posted by dontneed at 9/23/2007 No comments:

design and art and design as art 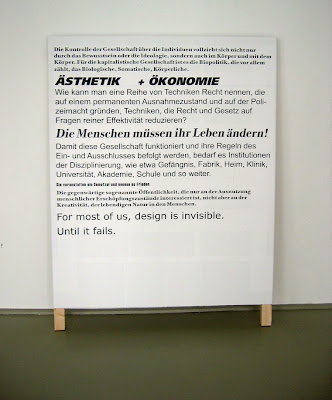 is the discussion about desing playing a big active part in art still going strong or is design back to its shelf?
what do you think...?
Posted by dontneed at 9/19/2007 No comments:

this could be our next extra-planetarian biennial destination. 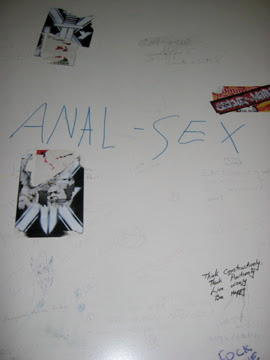 the new york times just did this piece about the influence that the east village had in the art making in new york.
Posted by dontneed at 9/15/2007 No comments: