laughing or crying at life 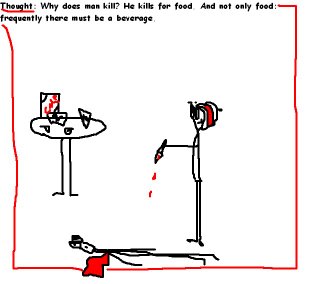 life and art are always chasing eachother, that is why
isabel allen does give her cartoons such a charming character.
inspired by the sayings of wood allen and drawing so freely like a kid,
she is having a laught at life. for more cartoons leave a comment and
isabel will let you know what you have to do to see more.
Posted by dontneed at 11/22/2006 No comments: 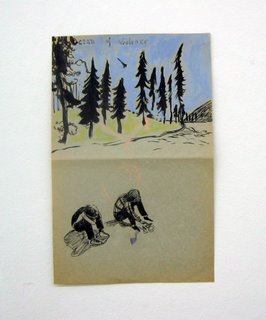 isabelle fein is delivering a great amount of excellent drawing material.
Posted by dontneed at 11/13/2006 No comments:

Ali Mahdavi
Born in Tehran in 1974, but now living in Paris, Ali Mahdavi is a filmmaker and designer of costumes that are extravagant affairs inspired by French Catholicism and Mahdavi’s Persian heritage. From silver cloaks to opulent purple robes stitched in gold, these strange outfits tread a fine line between high church and camp. After completing his studies in Paris at L’Ecole Nationale des Arts Appliqués Duperré, Mahdavi worked for the French fashion designer Thierry Mugler. In 2003, Mahdavi had his first solo exhibition at Scout Gallery in Hoxton Square, East London.

thanks to i-d magazine
see the video ali mahdavi

Ali Madhavi has Alopecia Universalis, a disease that deprives him of hair and his film focuses on those who are similarly afflicted. “I have been compared to all the bald people on earth….yet all I need is a wig for all resemblance to evaporate. No longer having hair violently changes our relationship with others, and the rules of seduction, desire, and one’s love-life are deeply disturbed, especially if the illness manifests itself before adulthood. Having lived through the same pain, shame and thus the same arrogance, I was convinced that we would all have the same feelings. Yet I was forced to notice while working on this project that even if, like a faltering army of clones or extra-terrestrials, we belong to the same race, deep down we are all just as different from each other as if we had hair and our lamented eyelashes and eyebrows.”
Posted by dontneed at 11/10/2006 No comments:

Get Your Own! | View Slideshow
"the galleries are usually full of air", that is what martin creed is thinking and saying. listen the interview he gave in newzeland. he also do dismistify the concept of minimal art in the tradition of carl andre and donald judd. he may have a very good poit there.
Posted by dontneed at 11/01/2006 1 comment: