which these is your house? not aesthetically speaking

how can we deny the influence of film in the creation of some good art pieces today and in the other hand, behind every film there is an artistic touch. just check this one
"it is your choice, the reward maybe survival"
selected comments

Which house do you live in?

In this film we are told by Civil Defense that as a poor housekeeper we are going to die. Also we are told that the house must be freshly painted or we will die. This message had to be brought to us by the "National Association for Looking down on the Neighbors" although it says the Fix up, Clean up, and Paint up Foundation. (Although people are dying in slums I can't recall the cause ever being a nuclear bomb blast.) I am really surprised to see that money was spent to assess the effect of the nuclear bomb on newspapers and magazines on tabletops. (What did they think would happen?) But the real questions are, did they think we could just dust the sofa off and go back to a regular day after a A-bomb? Should I go join a group of vigilante housekeepers that will protect my city? (snd) Am I more likely to die if I have dry skin? I personally am going to do what I always have,... use handlotion and hope I am not hit with an atomic bomb.

And you wonder why the kids who grew up watching and absorbing these lies have led the good ol' USA down the road we are on now in 2007. Look at the age of almost all our presidential candidates in the year 2007. That era of kids in America were constantly fed this dose of propoganda in their classrooms and @ home in front of the new TVs. My generation got Schoolhouse Rock. We are still paying to this day for the lies and fears pushed onto that generation w/ the early advent of the TV. Our reality in 2007 is not more than a stone's throw from the BS theories bullied on us by that generic, authoratative voice in those old propo-docs. We still seem to be governed and affected by this EXACT mentality 24/7 in the present day USA. Fear, lies, utter contemmpt for common sense and the Golden Rule!!! The BOOB TUBE--the biggest WEAPON in our governments arsenal--NOT THE BOMB!!!! Oh yeah, don't forget that spring cleaning and your new paint job on the house. As for 2007---just keep shopping and just keep on watching another episode of Desperate Housewives or American Idiot-(oops, I mean IDOL!)!!! Fear, GOD, GDP, GOP, GOD, GDP, GOP----politics and a gross domestic product a SOUL of a nation DO NOT MAKE!!!---we can do so much more in this world CITIZENS OF THE WORLD!! 2012--Paradise Waits??????????????????????

Email ThisBlogThis!Share to TwitterShare to FacebookShare to Pinterest
Labels: art, deleuze, gilles, house in the me, thinking

on enthusiasm and producing oneself 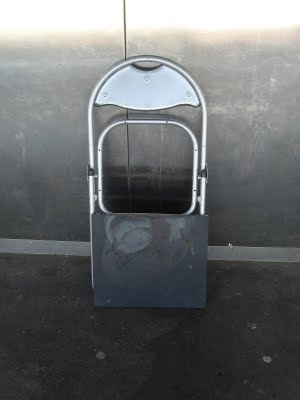 some artists are relly reflecting about their existence and their relation with the whole art scope! here is michael eddy writing for vitamine c in china. very refreshing words!
Posted by dontneed at 8/11/2009 No comments: